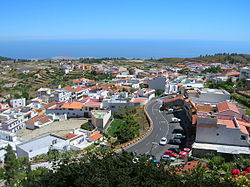 Vilaflor is a municipality and a village in the south-central part of the island of Tenerife, one of the Canary Islands, and part of the Santa Cruz de Tenerife (province), Spain. Vilaflor, with an altitude of 1,400 m, is the highest village of Tenerife, situated south the Teide volcano. It is located 7 km north of San Miguel de Abona and 51 km southwest of the island's capital Santa Cruz de Tenerife. The population is 1,804 (2013) and the area is 56.26 km².
Posted by Rere at 7:52 AM